Breaking news!  Windows Mobile 7 is here, and it features a User Experience (UX) that is laughable!  Don't ask me, ask my wife, who thought I was joking when I showed her a few pictures of the mobile OS.

Beyond the interface, it appears that the the Windows Phone 7 OS is bloated, but you would never tell reading articles like this one, which praise the triumphs of Windows Phone 7 models for requiring a minimum of a 1GHz, processor.  Sorry buddy, don't trip on your bag of Microsoft PR money on your way out.

Don't get me wrong, my new Android phone (I finally upgraded from my iPhone 2G) has a 1 GHz processor and it's a great experience -- but Android is flexible enough to run on lower end phones, increasing the usability of the OS.

Anyway, I'm getting off topic.  Let's hone in on a few areas where the UX is lacking:

Cut off text:  This is the first thing that will stand out to people looking at a Windows Phone 7 for the first time.  Everywhere you look text is just chopped off.  This happens not only in Microsoft created applications (see Office image below), but in 3rd party apps -- meaning that this "flaw" is likely an issue with their SDK.  I put flaw in quotes because I'm certain that Microsoft wants applications in their OS to look this way.  I just ask, why?

I might also be just nit picking, but I really don't enjoy the default font selections these apps use.  It sort of looks like some kind of Eras Light looking font (same one the Zune uses), and really isn't very readable, especially overlaid on a background image. 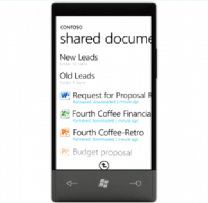 Cut off everything!  Windows Phone 7 has a variety of ways to chop apps down to size.  Almost every screenshot from the phone shows the screen cutting off an app from the left, right or bottom.  In some cases you will also see the next tile of an app peaking out on the side of the screen.  This is presumably done so people know that there is more information to see, but it just looks sloppy.  Heck, even the Windows Mobile "Start" screen (a.k.a home screen) is chopped down a bit along the bottom (see below).

It seems that all Windows Phone 7 apps have the chopped off look.

Get ready to swipe (and swipe and swipe):  The reason apps are chopped is due to a new UI concept introduced with Windows Phone 7 called tiles.  Essentially applications are spread across many tiles and you can swipe left and right to navigate around an app.  This can be visually appealing, however, it hinders a user from using applications quickly and effectively -- forcing them to swipe through pages of tiles to locate the portion of the application they wish to be using.

It all wreaks of bad screen management to me.  It's a mobile OS!  Don't build giant mosaics for people to gawk at one 800x480 screen at a time.

Windows Phone 7 apps require many swipes to get to the information you need.

Start screen:  Since this is a Microsoft device, it is mandated to have some sort of Start menu, or in this case Start screen.  Locating items in a traditional Windows Start menu has always been dubious at best.  To make things more challenging for (the unfortunate) end user who purchases this phone, Microsoft has decided that all Start screen icons should look identical at a glance, making it difficult for a user to quickly access the information they need.

Beyond the icons, the Start screen has very poor screen management, awkwardly fitting on Microsoft's own screen specifications.  This looks like a case where the software folks never spoke with the hardware folks.

Windows Phone 7 almost fits 8 regularly sized icons (the bottom two will be chopped off), where as Android and iOS fit 16 per page.  There is no real reason for the icons to be so big, except to enhance readability, but with all the icons looking the same, the Start screen isn't very readable at all.  In addition, there is a band of unused wasted space along the right side of the screen.  This makes the phone look unpolished and more suited as a demo than a commercial product.

With UX follies like these, it is apparent that Microsoft rushed this out to the market without any real world user testing.  It's no wonder why Gartner predicts that Windows Phone 7 will only bump Microsoft from a 4.7% to 5.2% mobile market share in the next year, ultimatly falling to 3.9% by 2014.

As a takeaway, I decided to create this image, which would show what my homepage might look like, transformed as a Windows Phone 7.  Enjoy! 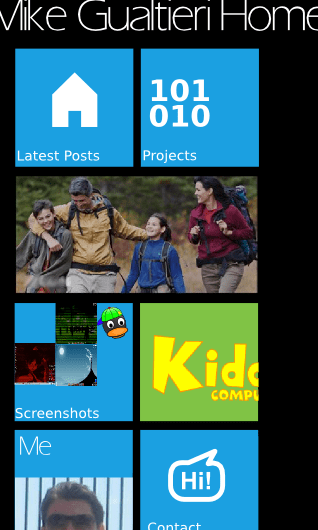