Am I the only person in the world who is unsatisfied with the major lag while playing YouTube video's this past week?

I started experiencing this problem on September 9th, the same day as the Google Instant launch.  I first assumed the problem was on my end, but found that the problem persisted on different internet connections and across multiple devices.  I shrugged the lag off as a minor issue that would be resolved in a day or two, but over a week later and YouTube still has considerable lag (e.g. video re-buffering every few seconds).  Is this fallout from the additional bandwidth/server stress from Google Instant? -- fallout from YouTube live streaming? -- who knows...

This only really became a problem for me until I was watching the Depeche Mode video for Everything Counts, and it froze on this unflattering frame.  Pretty terrible, right? 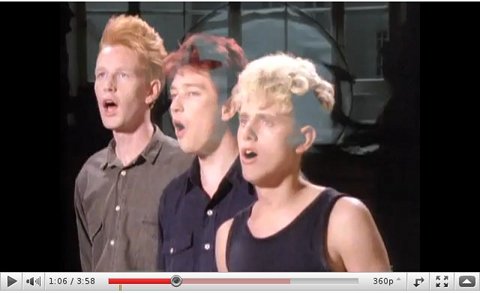 For most people (including me) such a problem is only a minor annoyance, but this annoyance underscores why Net Neutrality is of critical importance.

What if the YouTube problem isn't YouTube/Google's fault at all, but is your ISP was purposefully crippling YouTube traffic in preference to their own video service.  What if the website wasn't YouTube, but something more critical, like financial trading?  The implications can become scary quickly, and are always against the interest of the end user.

Update:  Last night when I decided to write this short post YouTube was barely usable.  Today it looks like many videos are working well, although still others have the buffering issue.  Here's hoping for a speedy fix so I can get back to listening to copyrighted songs at work!